The intelligence section of Sepah forces in Iran is trying to compensate the low performance of religious and clergy schools is Iran by resorting to intimidation and force. Considering the fact that criminal charges are applied to converted Christians and the same way that charges are applied to those who are caught with hundreds of Bibles and other books as well as those who have dual citizenships and are charged under political crimes.

Based on a report by Iran Human Rights Watchdog Network, Tuesday July 25, 2017, thirteen members and activists of domestic churches in Tehran, Ray, and Pardis were arrested and detained by IRGC, their condition still unknown.

Immediately after the arrest, Iran’s state media quoted sources close to IRGC Intelligence, and published dozens of images of the Holy Book, Theological booklets, educational books, and CD that indicated items have been stored in a place, and were confiscated.

According to reports, after the arrest, houses of the arrests and their acquaintances’ were raid and searched, items such as Satellite Dishes, computers, books and CD were seized.

Concerns over the condition of those arrested increased since several of the family members’ attempts to reach out to the Security and Judiciary officials, had no results.

Latest reports indicate that family members of the arrests showed up in several judicial branches and demanded clarifications on their conditions and whereabouts but have been faced with authorities’ threats and violent conduct.

As reported by the Iranian national media and cited by close sources of the Sepah (IRGC), several Christians in Tehran, Rey, and Pardis areas were* identified and arrested as a result of a video having been published in which dozens of Bibles, textbooks, theological notes, and CDs that had been stored and discovered by the Sepah (IRGC).

IRGC claims those arrested are “Religious Heretic”, “Christian Missionaries” and “Members of Evangelical House Churches” that on top of Propaganda for Christianity, attempted on “Disturbing public opinion and deviating youth on the ground and in the Internet”.

A report published by IRGC states that “included in documents seized from the detainees, there were various books on how to spread Christianity, methods of networking, attracting sympathisers, connections with foreigners and destroying Islam” were found.

Photos published by Sepah (IRGC), have shown a huge number of Holy Bibles and textbooks.

In such a government in which the clergymen like Sheykh Jafar Sobhani, would rely on the interpretation of 28th verse of Tobeh (Repentance) Sura that considers Christians as “political unclean” to explain the harmful relationship between Christians and Muslims, it is easily noticeable that these Holy Bibles and textbooks that were burned by the Islamic Republic Government of Iran, had happened before and the news was broadcast-ed. A few years ago, the office of Inspection and trafficking with the cooperation of Security forces of Sepah found 2 boxes containing 300 Holy Bibles and they were burned them.

In recent years, and especially following the Islamic Republic’s leader and a few Shia referential clergies’ warnings, pressures have been increased on neo-Christians in Iran and there are dozens of Christians and Christian converts in prisons and detention centers of the IRI.

Print and distribution of Christians holy books in Farsi is banned, Protestant Churches have been closed, their religious ceremonies are banned. 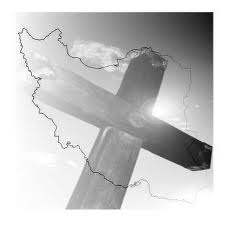 Referring to 125 year of jail time for 12 Christian in recent months, the senior activist and head of Iranian Church in Britain, in response to a question about the message of these harsh sentences by judges of Islamic Republic courts, said “it’s a sign of intensifying security concerns against religious minorities in Iran, especially Protestant Christians”.

9,104 Thoughts to “Forcible actions of Sepah military against the large community of converted Christians in Iran”