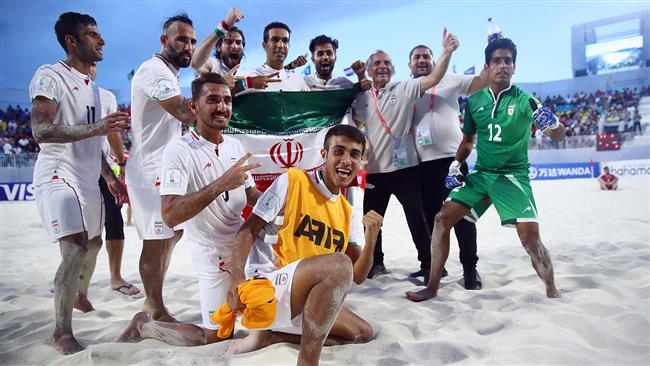 The national Iranian men’s beach soccer team has kept its position as the best Asian squad in the latest edition of the Beach Soccer Worldwide (BSWW) rankings, and stayed put in the world’s third spot.

According to the latest monthly rankings released by the BSWW, the organization responsible for the founding and growth of beach soccer, Team Melli Football Saheli gained 3,208 points.

Japan occupied the second place in Asia and sat in the ninth slot in the global rankings with 1,759 points.

The Japanese squad was followed by the United Arab Emirates (UAE) and Oman teams, who landed in the 10th and 14th spots respectively, having accumulated 1,425 and 1,086 points.

The national Iranian men’s beach soccer team put a highly commendable end to its campaign at the 2017 FIFA Beach Soccer World Cup in the Bahamas, and ranked third at the end of the high-status international event.

On the final day of the tournament at National Beach Soccer Arena of Malcolm Park in Nassau on May 7, the Iranian team defeated the Italian squad 5-3 in the third-place play-off.

In the title game, Brazil also overwhelmed Tahiti 6-0 and finished as the champion.