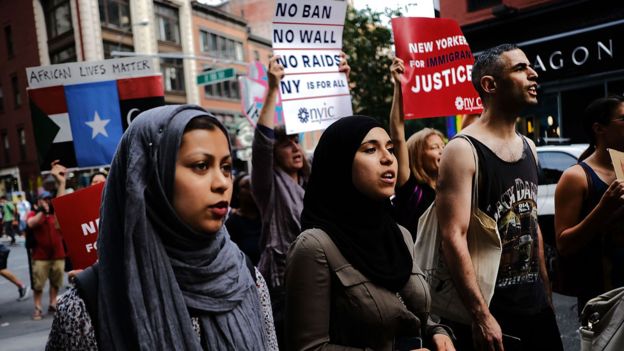 It means people without “close” family or business relationships in the US could be denied visas and barred entry.

Lawyers took up positions at US airports, offering free advice.

But there was no sign of the chaos that affected travellers when the first version of the ban was brought in at a few hours’ notice in January.

That is because the executive order does not affect people who already have valid visas or green cards.

The Department of Homeland Security said it expected “business as usual at our ports of entry”.

But the judges provided a major exception, for those who have “a credible claim of a bona fide relationship” with someone in the US.

The effect is that citizens of the affected countries with a close relative in the US, such as a spouse, parent, child or sibling, will potentially be allowed in.

In a last minute change, the Trump administration extended the definition of close family to include fiancés.

However grandparents, aunts, uncles, nephews and nieces are not considered to be “bona fide” relations.

The rules apply to people from Iran, Libya, Syria, Somalia, Sudan and Yemen, as well as to all refugees.

Moments before the ban began at 20:00 Washington time on Thursday (00:00 GMT), it emerged that the state of Hawaii had asked a federal judge for clarification.

Hawaii’s attorney general has argued that the definition of “close family” is too narrow and may improperly prevent people from travelling to the US.

The American Civil Liberties Union (ACLU) said it would be closely monitoring the guidance and implementation of the order.

The Supreme Court is expected to make a final decision on the ban when its next session begins in October.

Who can come in?

According to the new rules, for the next 90 days those from the six countries without a close relationship will not be able to enter the US.

IN – a parent, spouse, fiancé, child, son- or daughter-in-law, or sibling, including step- or half-siblings.

Also exempt from the new rules are those with business or educational ties to the US.

However, the guidelines specifically state that the relationship must be formal, documented and not formed for the purpose of evading the order.

As well as making clear that those with valid visas and legal permanent residents are not affected, the Department of Homeland Security says dual nationals who travel on their passport from the unaffected country will also be allowed entry.

The Supreme Court also approved a 120-day ban on refugees entering the US, allowing the government to bar entry to refugee claimants who cannot prove the same ties to an American individual or entity.

But opponents of the ban point out that refugees are invited to relocate in the US by the UN Refugee Agency, which has well-documented relationships with the people they refer for resettlement.

It remains unclear how many refugees scheduled to resettle in the US will be affected, but the government will fully halt the programme once its quota of 50,000 refugees for the budget year ending in September is met.