Skip to content
You are here
Home > Activists > Continued human rights abuses in Iran, crackdowns and arrests and killings of protesters

As human rights abuses continue in Iran, the detention of civil society, labour, student activists, and women activists and journalists continue in various Iranian cities. Thousands have been detained, hundreds killed, and dozens were missing during recent Iran protests since the third week of November 2019. Iranian regime officials have also cut off Internet networks across the country, preventing leaks of current news and events abroad.

News sources report that many students, labour, media, and women’s activists have been abducted and detained in recent weeks. 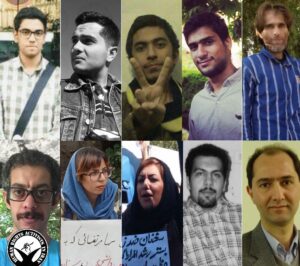 According to reports, on Monday, November 17, Mitra Hosseinzadeh, Farhad Bahmanpour and Maryam Kamran, three student activists in Isfahan, on Wednesday, November 19, Hamed Zahraei and Amir Hamzeh Safizadeh, two resident bloggers and media activists in Shiraz, on Thursday, November 20, Yashar Dar al-Shafa and Behnam Karimi, two Internet activists, and Karim Motalebi, Ali Jafari, and Shahin Salari, three civil activists in Tehran and Karaj, were arrested on Saturday, December 22. According to human rights sources, their condition and fate are unknown. Their families’ follow-up has not resulted in any awareness of their disease.

According to human rights sources, during the protests in November 2019, which began on the evening of the 14th and lasted for 11 days, the Internet throughout Iran was hit by an unprecedented outage, killing hundreds of people in the same silent severance of ties with the outside world. Thousands were injured and detained, and dozens were missing.

According to the latest news, the number of detainees in these protests (November 1998) is close to 14,000. The status and fate of many of them are unknown.

16,437 Thoughts to “Continued human rights abuses in Iran, crackdowns and arrests and killings of protesters”